I suspect many of you may not have heard about this film. Neither had I in fact until I found out my local cinema was doing a few showings. I watch the trailer and thought “Well that looks… interesting”.

“But Chronic Chronicler”, you may be asking again you very questioning reader, “doesn’t interesting usually mean something is, or was, terrible and you just don’t want to say it?” You are very observant mystery reader and yes I agree with you.

Interesting is a word that allows to get your point across to someone without being a complete prat about it. But not this time, this time I mean what interesting means in the dictionary. I know. I can hear your intake of breath in shock. But let me remedy that by going into that most sacred of Chronic Chronicler traditions, the obligatory overview. 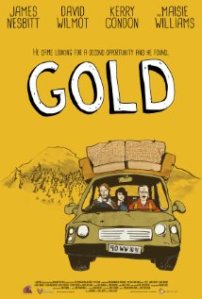 Ray (David Wilmot) has been away from his family for twelve years, spending time in hospitals and psychiatric therapy in order to come to terms with a past suicide attempt and has been brought back into their lives due to his fast declining father.

Having returned to the County Dublin suburbs, Ray decides he must also try to re-establish ties with his estranged daughter Abbie (Maisie Williams) and his ex-wife Alice (Kerry Condon) who has married his former P.E teacher Frank (James Nesbitt). Although, out of pity, they take him in for a while; plans for rekindling familial relations, do not seem to come to fruition.

When you hear that this film is an “offbeat comedy”, you know that it isn’t going to be a laugh out loud experience, rather it’ll leave you with a smirk on your face at times and that’s is what Gold does. From Frank’s serious and over the top workout videos to Ray revealing a certain nickname students gave Frank in the past, it’ll leave you not in tears laughing, but always faintly amused.

James Nesbitt’s performance as Frank is solid, being the total antithesis to Ray. Whereas Ray has few, if any, plans after coming out of hospitalisation, Frank is focused on achieving his goals and is unmoved by any form of weakness. Not only is attempting to pushy Ray’s daughter Abbie in her venture of becoming an athlete, he is also trying to advance his own career through self-made unwittingly funny workout videos.

Fair credit is also due to Maisie Williams as, if you don’t watch Game of Thrones you may be hard pushed to name something else she’d been in. But to be fair, Maisie thrives as the estranged daughter, trying to reach her step father vision of seeing second place as just the first loser by taking performance enhancing drugs as well as, to begin with, reluctantly making bridges with her absent father.

But the star of the show is clearly David Wilmot as the bumbling Ray. While never really intending to do any harm, Ray manages to accidentally or purposefully with no malicious intent, fractures and ruins the lives of his family. Wilmot has made a character whom you should be annoyed with sort of loveable. You can see why he does the things he does and, while some are stupid, he does have his heart in the right place.

One scene which comes to mind is when Abbie agrees to go with Ray to see her deteriorating granddad on the condition that Ray gets some drugs for her. Assured that they are made from “all-natural products” and that it’ll be a one-off, Ray obliges. 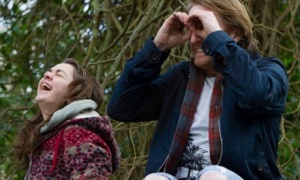 The rational side of me calls him an occasional idiot, or as Irish people may term it, acting the gom, you can see that Ray is only doing it so that he can show his daughter to his fast declining father and, seeing no other way he can get Abbie to come with her, obliges with her request. Ray cares for his family and wants to do his best to re-establish connection with them, even if it does go down a road not many of us would tread.

This film is also good at avoiding the usual tropes of comedy while also getting handpicking the best elements of drama as, aside from the clearly symbolic use of Ray’s sofa tied to the top of his car, Gold seems to stick to the ethos that not every bad thing that happens will have a consequence. They may be forgotten about in the presence of a larger problem or put on the backburner for later, not everything is dealt with in one huge confrontation at the end which is a nice way to go about things.

Gold also tackles the issues of suicide a in a gentle manner as, while not making it the whole point of the film, it is a sombre note in the film’s repertoire which adds to the film’s realism that it tries to propagate which was quite a nice way in which to explain a serious topic.

I wouldn’t say that this film is for everyone though as its seeming lack of overall plot may irk some people, with the film meandering on without any real goal in sight. However Gold is not made with that premise in mind, it’s more like taking a section out of ordinary life. There is no rush against time or final fight to be fought; it’s just events that happen. Mistakes are made, like life and that’s what is most appealing about this film, things happen and, for the most part, you could almost see them happening down the road from you and for that, Niall Heery (director and co-writer) and Brendan Heery (co-writer) must be given great credit for allowing it to flow in such a delightful fashion.

Thanks for reading! If you liked what you read then please follow me here on WordPress or even on Facebook and Twitter as well. Also, if you fancy writing for The Chronic Chronicler, then send me an email at chronicchronicler1@gmail.com. Thanks again for reading!