I seem to have a thing going on with my ‘inner socialist’ at the moment as, if you read my review on Our Zoo: Episode 4, or know me in real life, you’ll notice I take a bit of joy in seeing the working man rise up against the ruling elite, be it snobby aristocrats or the indifferent government. Well it seems that writer Stephen Beresford and director Matthew Warchus have noticed this quality and decided to make this film so that it would make me nearly have a seizure of joy on seeing two things I love come together: equality and workers’ rights.

It’s 1984 and, in a time when anything other than heterosexual conduct is viewed as deviant and immoral, the annual gay pride parade is underway. But while the vitriol against homosexuality is plain for all to see, Mark Ashton (Ben Schnetzer) sees that vitriol is not only directed against them, but also against the striking miners.

In a show of solidarity against those who are being attacked in the press, by the police and to an extent by the public themselves, Ashton and his friends form Lesbian and Gays Support the Miners (LGSM). Though their efforts are initially in vain, though money begins flowing in, they find a willing donor in the form of a small mining village in Wales.

Dai (Paddy Considine) accepts the offer and invites the group down to the Welsh mining village which, not unexpectedly, causes a bit of friction. Yet, in a time when both miners and homosexuals face persecutions on all sides, prejudices are put aside and alliances are forged.

Where to start on a film which had such a brilliant cast? No-one puts a foot wrong in this film so it is a difficult task to give everyone their due praise, however I shall try to pick out the cream of the crop in this review but for those who don’t get mentioned, it is not to say that they were not brilliant, but I couldn’t mention them without going into a 10,000 word review.

Let’s kick this off with Jonathon Blake (Dominic West). West has been growing as an actor some years now, what with his roles in The Wire and The Hour, as well as twenty years in making film which haven’t found massive success, which makes Pride something as just rewards for West.

Jonathon Blake is one of the older members of LGSM yet he sparks life into every scene that he graces. While being an extravagant dancer, West brings a realistic side to the party-goer as well, knowing what life for a gay man in 1980s Britain is like and how they have been persecuted in the past, making for a well-rounded and loveable character.

While I do love his performance in The Hour, have not seen The Wire, and only other film role I remember him being in is Mona Lisa Smile, this performance is his greatest thus far in his career and I hope casting directors see his great potential from now on as Dominic West must become more of a household name than he already is.

One of the high flying actors of this film, with her name getting feature billing alongside Bill Nighy, Dominic West and Paddy Considine, Imelda Staunton has finally made me see her as an actress outside as her brilliant portrayal of Professor Dolores Umbridge, as the feisty and delightful Hefina Headon.

She’s viciously down-to-earth and has comedic timing which I thought her incapable of for some vague and not well thought out reason. Her support of the LGSM and their members is fervent throughout, as you’ve probably guessed from the trailers, and she acts as a lynchpin between bringing the mining and gay communities together.

Her acting is sublime and, despite being a Londoner, pulls off a terrific Welsh accent that doesn’t err to the side of the stereotypical accent people foolhardily attempt, which to be fair most of the non-Welsh cast do in great style.

But let’s move away from the big names and move onto the smaller actors who burst with live of the big screen, first of which is Jessica Gunning who plays Siân James. Although known for her roles on the small screen like Law & Order: UK and an appearance in Doctor Who, this is Gunning’s first major production, but it doesn’t show for a moment.

Gunning as James is confident, forthright with her views and stands up for what she believes in, even to the police. She accepts the LGSM for who they are, not just because they donate a lot of money to their cause. Seeing Gunning play this role in such an abrasive way makes her a character you really cannot put out of your mind and that, in hopes to the future, her big screen abilities are not forgotten.

Not only Gunning, but Gunning’s on-screen husband Martin as played by Rhodri Meilir also brings much to give hope to humanity as, although he is nervous about gay people coming to their town, he eventually shows his true mettle and how far he will defend his friends, no matter what their sexuality.

To close on actors so I can get a chance to speak on the other aspects of the film, I’ll just quickly brush over George MacKay as Joe/Bromley and Ben Schnetzer as Mark Ashton, although brushing over their roles almost feels like an insult to their performances.

MacKay is yet another actor whom I had difficulty in remembering, having to resort to Wikipedia to be surprised that I’d seen him in Defiance and the two-part TV serial Birdsong. His role as a young half-closeted gay man who although out in public, but remaining partially in the closet from his family is brilliantly done. 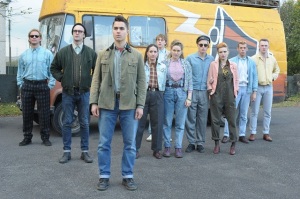 He almost represents the audience in a way, becoming a viewing glass as someone newly dropped into a new and wonderfully fantastic and, at times, frightening world of gay activism when being gay was not socially accepted in the way it is today. In doing that MacKay is spot on with his performance, he’s timid and not entirely knowledgeable of the situation, but his wariness to participate is turned into complete belief in the cause of helping the miners as well coming to terms with his private and public profile as a gay man.

Finally, Ben Schnetzer plays the social activist Mark Ashton with great style. The young activist who wants to fight for the rights of all, miners, gay, women, and so on, sees the rights of one and all as linked. While Schnetzer is a strong presence on screen on his own, it is when he shares the screen with Paddy Considine that Schnetzer truly performs to his greatest. They both show they truly believe in working together in order to fight the good fight. And when they shake hands, it is something so powerful that nothing can diminish its true significance.

The significance of this film, in the year when same-sex marriage became legal in the United Kingdom, as well as many atrocities being committed against homosexuals in Russia, Uganda and many other countries across the globe shows how far we have come and yet how far we have to go.

One part that shows that progress is still needed is that Northern Ireland, the place where Mark Ashton originally hailed from, still will not allow same-sex marriage despite the rest of the UK legalising it. But across the world gay people are still persecuted for being nothing more than true to themselves and that needs to change. 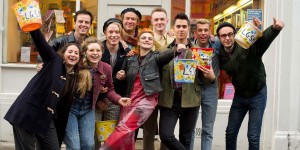 While change will not come swiftly, this film gives us hope that by working together, hand in hand, we can go forth as one and help make the world a more inclusive and accepting place. Attitudes need to change; people need to see without prejudices and hopefully, one day soon or in the far future, a person’s sexuality will be universally accepted identity of a person, rather than a mark of otherness.

But. while LGBT equality is a large part of this film, it is not the whole point of this film, as the Miner’s Strike of 1984-85 is also a large part of this film that I have seemingly underplayed in this review. A lot of films have come out where the basis of the plot is predicated on the industrial base of the UK being shattered, such as The Full Monty and Billy Elliot. It seems peculiar how Britain is focused on its industrial decline but views it in a way to birth new ventures. Pride does this with aplomb by giving dignity to the miners cause, decrying the unfair and bullying tactics the press, police and government used, while showing that the while one movement may die, another will be born from its ashes.

I hope you all go and see this film or, when the time comes, buy it on DVD as I have no doubt it will become a classic. A film has not come this close to greatness this year than any other and, by my recognising, Pride has surpassed greatness. This film has showed us that things are worth fighting for and, even if you lose the fight, you cannot give up as, by working together, you can achieve things you may not have even contemplated you would achieve.

Thanks for reading! If you liked what you read then please follow me here on WordPress or even on Facebook and Twitter as well. Also, if you fancy writing for The Chronic Chronicler, then send me an email at chronicchronicler1@gmail.com. Anything within reason is acceptable! Thanks again for reading!

One thought on “Pride – Handshakes Have Never Been So Powerful”