Hello there! Well I’m returning for a brief stint as it’s come to my notice that I’ve been awarded not one, nor two, but three, that’s right, THREE Blogging awards! I am quite bowled at people’s nominating my blog, even if I have been on hiatus for a while. Although that may just be the point, maybe I’m being given awards because I’m on my hiatus and the fact I’m not writing for a while is worth praising! But’s that’s enough of my weird paranoia and I’ll get straight on to my Versatile Blogger Award! Oh, just quickly before I start, to Drakulus and invaderc8, I will get onto your nominations as soon as I can, but I’m going chronologically so bear with me! 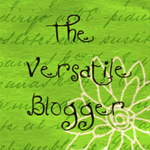 I’d like to say thanks to Gamer’s Therapy for nominating me and that you should check out and follow his blog for all his amazing stuff! Well, apparently I have to nominate fifteen
blogs for this award, so here goes!

Please check these guys out, large or small blogs, they are all awesome!

Finally, I apparently need to give you seven bits of personal information about myself, so enjoy learning perhaps uninteresting and trivial fact about yours truly!

Well I hope that was sufficiently uninformative and sleep-inducing, but if you are still awake and reading, I’d just like to say thanks again to Gamer’s Therapy for the nomination and I’ll see you all again when I put up my next Blogger Award!