As a student of history, I often get a high out of historical films, but then again I can also get incredibly annoyed when people automatically assume that I’ll like any and all historical films available to me. The same with books. Just because it’s got a bit of history to it doesn’t necessarily guarantee I’ll like the damn thing. But then the TV film on BBC 2 called The Wipers Times come around and damn it for being so damn good.

Based on a true story, the story follows Captain Fred Roberts (Ben Chaplin), Lieutenant Jack Pearson (Julian Rhind-Tutt) and the rest of the 12th Sherwood Foresters come across a printing press whilst attempting to find material to reinforce their trench. As the group’s sergeant happened to have been a printer before the dark days of the war, Roberts takes it upon himself to create a newspaper to rouse the spirits of the men. And rouse them they did.

To do film on the First World War is not a task one takes lightly, many films and TV series have trodden a ground well-trodden before them, i.e.: Blackadder, Birdsong, Joyeux Noël, A Bear Named Winnie, War Horse, and so on and so on. If you are going to make a film about the First World War, an area which has been covered in so many different angles, it leads one to wonder as to whether The Wipers Times can create their own place in this saturated bit of film history. Thankfully, they do.

The choices of Ben Chaplin, who appeared in the 2013 series Dates, and Julian Rhind-Tutt, who has appeared in the  film Stardust as well as the controversially cancelled BBC series The Hour, were bang on the money, as well with other explosive devices (bad bomb pun). Both actors were splendidly up to the task of providing an air of posh dignity as well as wit and charm, allowing a great bulk of humour to be merely Chaplin and Rhind-Tutt having witty exchanges between themselves.

Yet one must not forget the talent of their supporting characters. The choice of Michael Palin (Monty Python’s Flying Circus, but who really didn’t know that) as the understanding General who, whilst approving of the paper, is part of what is wrong with the war effort was a masterstroke. The scenes between Palin and Chaplin where humour and realism really come together as it gives a certain distinct quality to the film as it show that, whilst the General is someone who may approve of the “big-wigs” getting poked fun at by the men is good for morale, is still part of the overriding problem of ineffectual command. 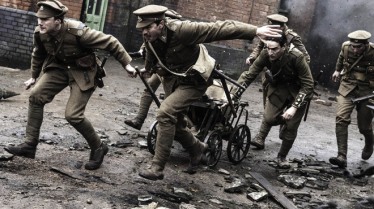 Mention must also be made to Ben Daniels (Law & Order: UK) who’s stereotypically uptight General gives us the insights of “prim-and-proper” society whilst also allowing Chaplin and Rhind-Tutt to wrangle as many laughs as possible out of him by being as “offensive” as possible.

In all honesty, the entire cast do a damn good job within their roles and props must be given to Ian Hislop and Nick Newman for their script. As both are veteran satirists and excellent writers, with Hislop editing Private Eye, a UK satirical current affairs magazine, they do justice to the source material they were working with, giving an affectionate, certainly humorous, and yet at times, moving piece of film.

The scenes away from the front can be seen to be especially moving, one particular that comes to mind is when Chaplin talks to his wife (Emilia Fox – Keeping Mum) about how the quiet of home is keeping him awake. But this is not to say that there aren’t moving moments at the front either. While there are a plethora to choose from, a certain piece of poetry, something which becomes a running gag in the film due to the fact the paper becomes inundated with poetry, is something which bring the film down to earth instead of remaining apart from the reality, though one can hardly accuse the film of doing so.Yet the final scenes are the most upsetting when the reality of what happens on the front and what happens at home do not necessarily translate into reality.

For a film centring around an attempt to bring humour to what appears to be a humourless period in time, The Wipers Times 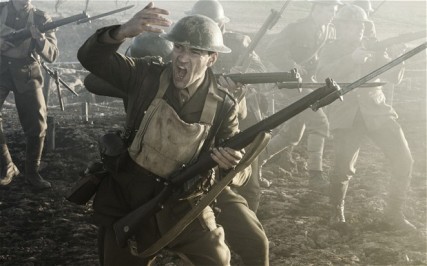 certainly achieves what it sets out to do and then some. It’s poignant, charming, witty, funny, especially the fantasy musical hall scenes and sketches around articles and advertisements within the paper. And one can hardly forget the buxom girls of the Poperinghe Fancies. The Wipers Times sets out to tell a story which may have otherwise not been heard, and it is told with great style and panache. I can certainly see Chaplin and Rhind-Tutt fighting it out for a BAFTA for their performances, and all from a film that just can’t seem to pronounce Ypres correctly. What a true depiction of British-ness.

Well that’s all from me, and this late editorial (Jan 23 2014) is just here to say that The Wipers Times is now out on DVD (I’ve got my copy). So if you enjoyed this wondrous, well-written, witty review (feel free to disagree in the comments below) please go out and buy this DVD as it is awesome. Or you could try and pirate it because you’re evil like that.