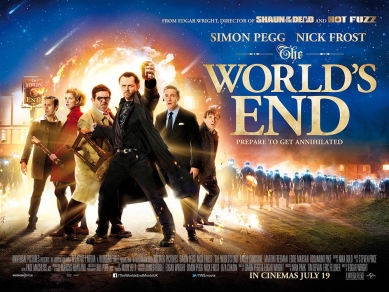 Another review I was meant to have done weeks ago, like Pacific Rim, but I’m doing it now so please take some time to read what I have to say on this film, despite the fact you’ve probably seen the film and read and watched a lot of reviews that are around by now. Unless you’ve not seen the film, not looked at any reviews or have only just realised The World’s End is out, but can’t be bothered to see the film to form your own opinion, here is my take on the final part of the Blood and Ice Cream Trilogy that is The World’s End.

So the end of the Blood and Ice Cream Trilogy deserve to be celebrated, and what could be more British than a pub crawl to end a trilogy of awesome films. Gary King (Simon Pegg) is a down and out guy who, when reminiscing about the night out of his life with his mates so many years ago, he sets out to reunite his now estranged and successful friends Peter (Eddie Marsan), Oliver “O-Man” (Martin Freeman), Steven (Paddy Considine) and Andrew (Nick Frost), as well as O-Man’s sister Sam (Rosamund Pike) also turning up, for another attempt of the Golden Mile in their hometown of Newton Haven.

A night of twelve pints in twelve pubs with a reunited gang seems to be the perfect setting for reminiscing, laughter, alien invasions and drunkenness. Oh, yeah, all the people in the town (near enough) seem to be acting oddly, you know, with blue lights glowing out of their eyes and mouths and trying to kill Gary and his mates. That sort of thing. With bladdering already in full swing, they persevere with their pub crawl whilst trying to escape without being noticed by the blatantly knowledgeable “blanks” as they make their way from the First Post to The World’s End.

So typical Pegg/Wright comedy ensues, which one can hardly see failing any time soon. The World’s End lavishly smothers you in humour whilst also giving a poignant story which is then in turn here, we all know that when Pegg and Wright are collaborating in a film, you know the humour is going to be awesome. The real question is, is The World’s End as good, or better than Shaun of the Dead or Hot Fuzz? The answer: As good as Shaun of the Dead, but not as good as Hot Fuzz.

I hate to judge a film against other films, even when it is part of a trilogy or even when it is a re-make of a film, but you do feel like that is the only course of action. Though, in fairness, The World’s End is by no means merely a complete copy of Shaun of the Dead, as it does have its own slant on things to give it its own identity. Pegg, Frost, and, well, pretty much the entire cast perform brilliantly, with special notice going to Nick Frost, as his character is no longer the bumbling idiot of the previous two films, rather more of a reluctant, yet complete bad- 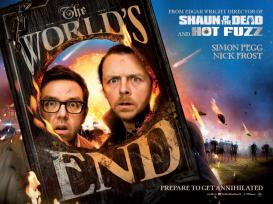 ass when push comes to shove.

Furthermore, the film has somewhat of a different tone to that of Shaun of the Dead and Hot Fuzz as while they were a huge amount of comedy with great plot-lines with enough blood to fill at least seven Olympic size swimming pools, The World’s End has all of this, and something quite significantly unique to its own story, a feeling of melancholy. Like the end of a long journey down a seemingly never-ending and joyful joyride after throwing the driver out of the car and leaving him for dead in a gutter beside a sleazy motel with the hooker we rented looking on in disgust from the top right-hand window in Room 28 as we have left her without pay and the possibility of a venereal disease. That sort of melancholy. The World’s End is an appropriate title and, after Simon Pegg and Nick Frost all showed their love for science fiction in their 2011 hit Paul, The World’s End at the hands of Pegg and Wright feels completely satisfactory, if not a little repetitive in comparison to Shaun of the Dead. 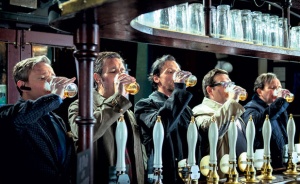 I hate to see it end, but end it must and though you could turn round and say The World’s End was a bit of a cop out, especially as how that modern art monster in the trailer was not used nearly enough the feature film, but in all honesty, it felt the appropriate way to end the trilogy and the film was by no means a failure. It displayed their clear love for science fiction and, while hysterical, was not afraid of highlighting that this was the end of an era, and that we should all be sad that it has come to a conclusion. It’s funny, heartfelt and full with enough science fiction and film references to be a satisfactory end to a great trilogy of films, with none of them falling short of greatness in their own right. Let’s just hope Pegg, Frost and Wright stay together and create more films that spoof and invigorate our imaginations. And make us laugh, never not making us laugh.